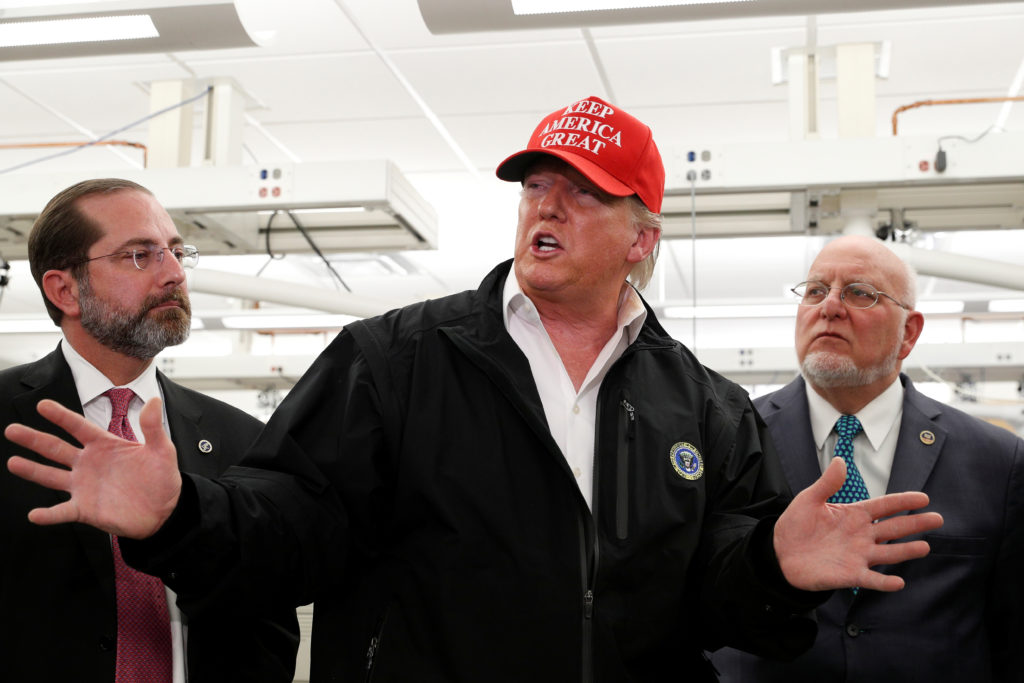 WASHINGTON (AP) — As the stock market convulses, airline schedules buckle and businesses worry their overseas supply lines will snap, President Donald Trump is looking on the sunny side of an economy clouded by the coronavirus.

For several weeks he’s played down the consequences of the public health emergency even as his agencies scramble to manage it. Now he’s suggesting that a robust jobs report might be explained in part by the prospect that Americans are hunkering down and focusing more of their spending in their own country. There’s no evidence that the virus has juiced jobs.

Trump’s plentiful and sometimes inaccurate comments on the outbreak this past week prompted the chairman of the Senate Health, Education, Labor and Pensions Committee, Sen. Lamar Alexander, R-Tenn., to suggest that Trump and Vice President Mike Pence stand back and “let the experts do the talking.” Trump paid that advice no heed.

A sampling of the past week’s rhetoric on the virus and other matters and how it compares with the facts:

TRUMP: “We’re going to have Americans staying home instead of going and spending the money in other countries. And maybe that’s one of the reasons the job numbers are so good.” — remarks to the press Friday.

THE FACTS: That is not one of the reasons the job numbers are so good.

The government’s report Friday showing employers added a healthy 273,000 jobs last month was compiled before the coronavirus had spread through multiple states.

Even so, the report showed employment at hotels was flat. Restaurant hiring jumped by more than 50,000, but most economists attributed that to relatively warm weather. Now, with many businesses restricting their employees’ travel, airlines are already getting hit: United Airlines said Wednesday it has instituted a hiring freeze.

Trump is probably correct that fewer Americans will go abroad and spend money while the outbreak is active. The flip side is that fewer foreigners may come to the U.S. and spend their money here.

WHITE HOUSE: “The President is no longer traveling to Atlanta today. The CDC has been proactive and prepared since the very beginning and the President does not want to interfere with the CDC’s mission to protect the health and welfare of their people and the agency.” — statement Friday about Trump’s planned visit to the Centers for Disease Control and Prevention.

THE FACTS: Actually, the White House rationale for canceling the trip was contradicted a short time later by Trump, who said he postponed because a CDC employee in Atlanta was thought to have contracted the infectious disease and “because of the one person, they didn’t want me going.” It was not about staying out of the way of CDC employees,

He said it turned out that the person was not infected. He visited the CDC after all.

TRUMP: “A lot of people will have this, and it’s very mild. They will get better very rapidly. They don’t even see a doctor … So, if we have thousands or hundreds of thousands of people that get better just by, you know, sitting around and even going to work — some of them go to work, but they get better.” – Fox News interview Wednesday.

TRUMP: “I NEVER said people that are feeling sick should go to work. This is just more Fake News.” — tweet Thursday.

THE FACTS: He seems to be suggesting that people with COVID-19 can go to work if they have minor symptoms, contradicting the guidance of his federal health officials. Regardless of how sick people may or may not feel, people are advised to stay home.

The CDC states that people with confirmed or suspected COVID-19 who do not need hospitalization should restrict their activities and “stay home except to get medical care.”

“Do not go to work, school or public areas,” it states.

TRUMP, on developing tests for coronavirus in patients: “The Obama administration made a decision on testing that turned out to be very detrimental to what we’re doing. And we undid that decision a few days ago so that the testing can take place in a much more accurate and rapid fashion.” — Wednesday at the White House.

VICE PRESIDENT MIKE PENCE: “The last administration asserted FDA jurisdiction over testing and the development of tests like this. … The president changed that on Saturday so that now, as I spoke to several governors this morning, the states now have the ability to actually conduct the coronavirus test in state labs, university laboratories.” — Wednesday at the White House.

TRUMP: “And now we have tremendous flexibility. Many, many more sites. Many, many more people. And you couldn’t have had that under the Obama rule, and we ended that rule very quickly.” — Wednesday.

THE FACTS: They’re trying to blame Barack Obama for something his administration…