BEACHES in Spain have been forced to close for the third week in a row as hundreds of thousands of tourists faced with queuing for hours.

Local authorities are struggling to cope with the mass influx of crowds during scorching hot weather and have had to call in the police and extra stewards to seal off entrances. 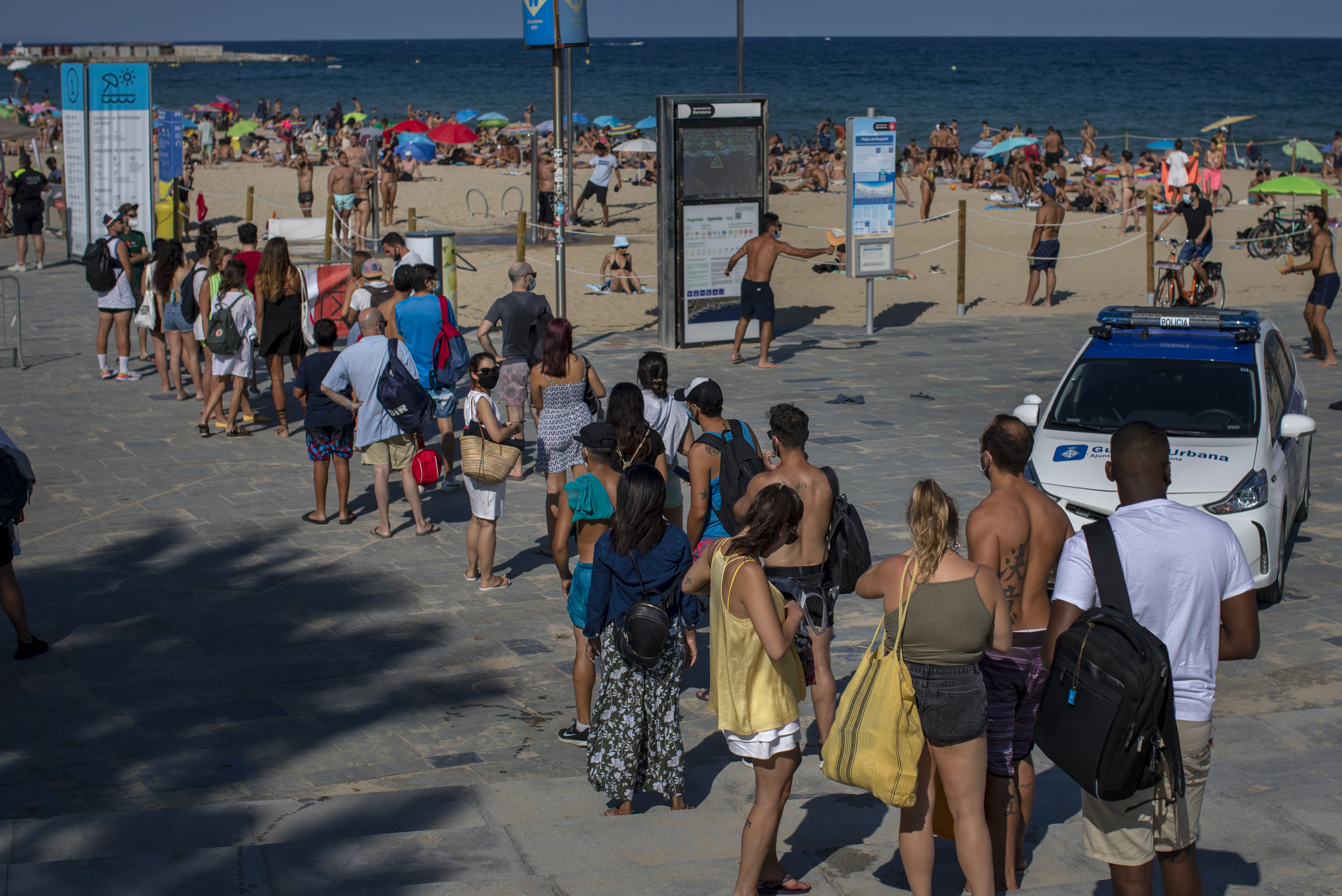 Tourists have been forced to queue for hours as beaches in Spain close due to crowdsCredit: AP:Associated Press

Benidorm is opening its booking system for the main beach early today because of its enormous popularity while other councils look at new ways of coping without busting the coronavirus social distancing rules.

Beach councillor, Mónica Gómez,said: “In response to the request of users and to expedite the process we have decided to advance the schedule of reservations.

“As we stressed during the presentation of the beach reopening plan, Benidorm Beach Safety is a modular project that adapts to the needs and reality of each moment.”

British holidaymakers in Benidorm had to queue for two hours over the weekend while trying to enter the beaches.

Spanish officials have carved up Poniente and Levante beaches into 5,000 13x13ft sunbathing squares – with a maximum of four people per space due to the coronavirus outbreak.

According to local media, 1,487 slots were reserved online – leaving just 70 spaces available for people wanting to book in person. 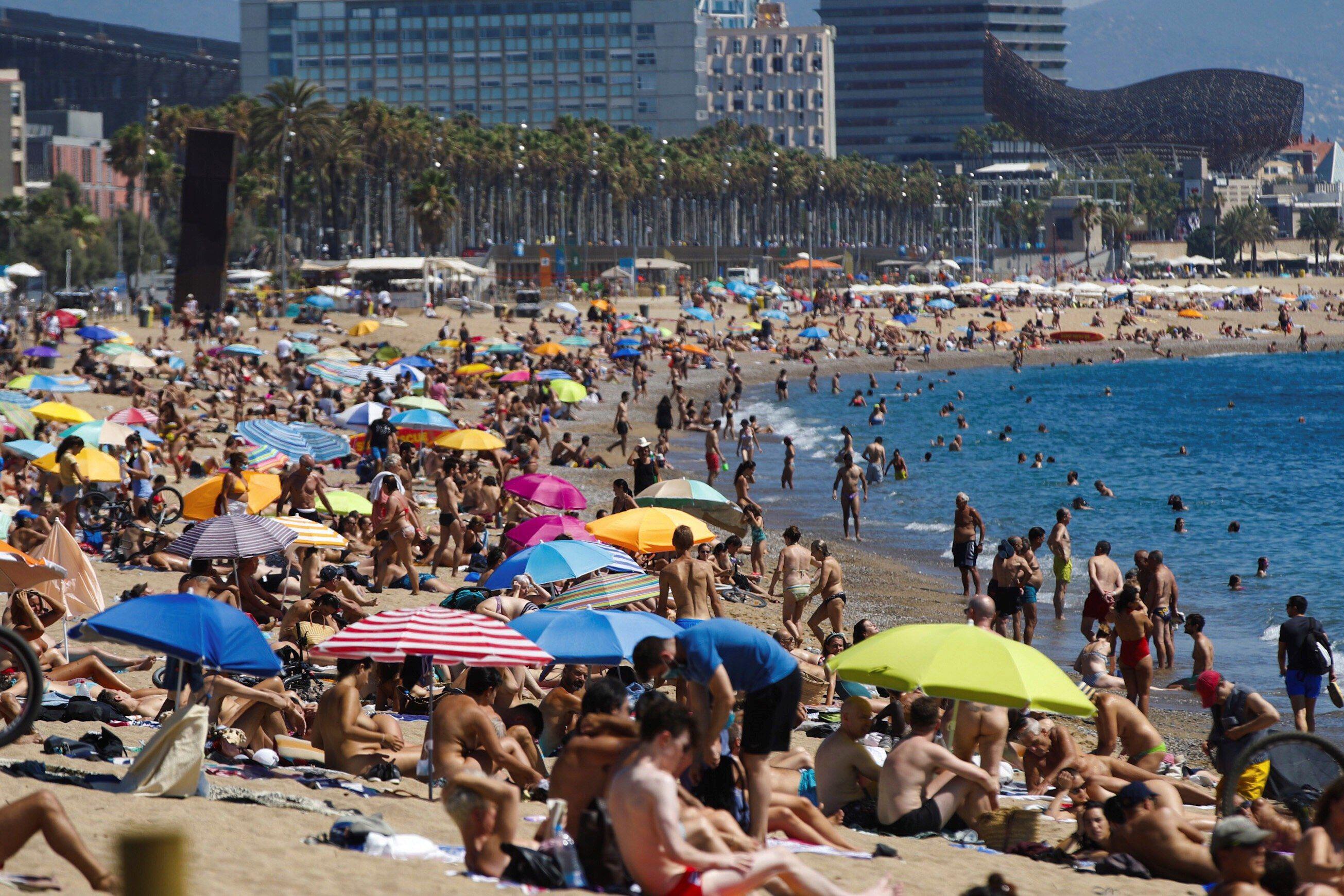 Beaches have been limiting capacity, with many full by middayCredit: Alamy Live News 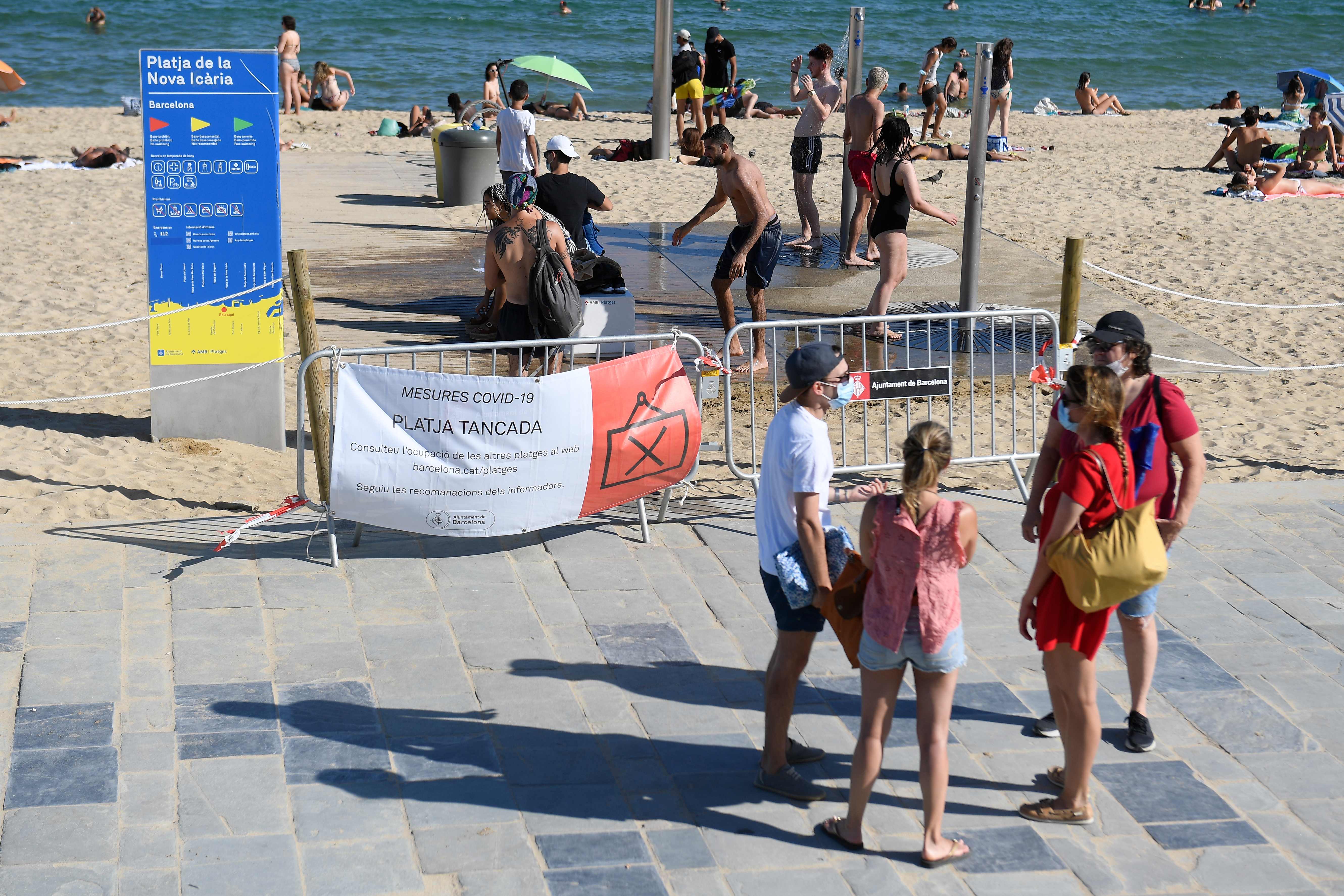 Closed signs have been put up at beaches over the weekendCredit: AFP or licensors 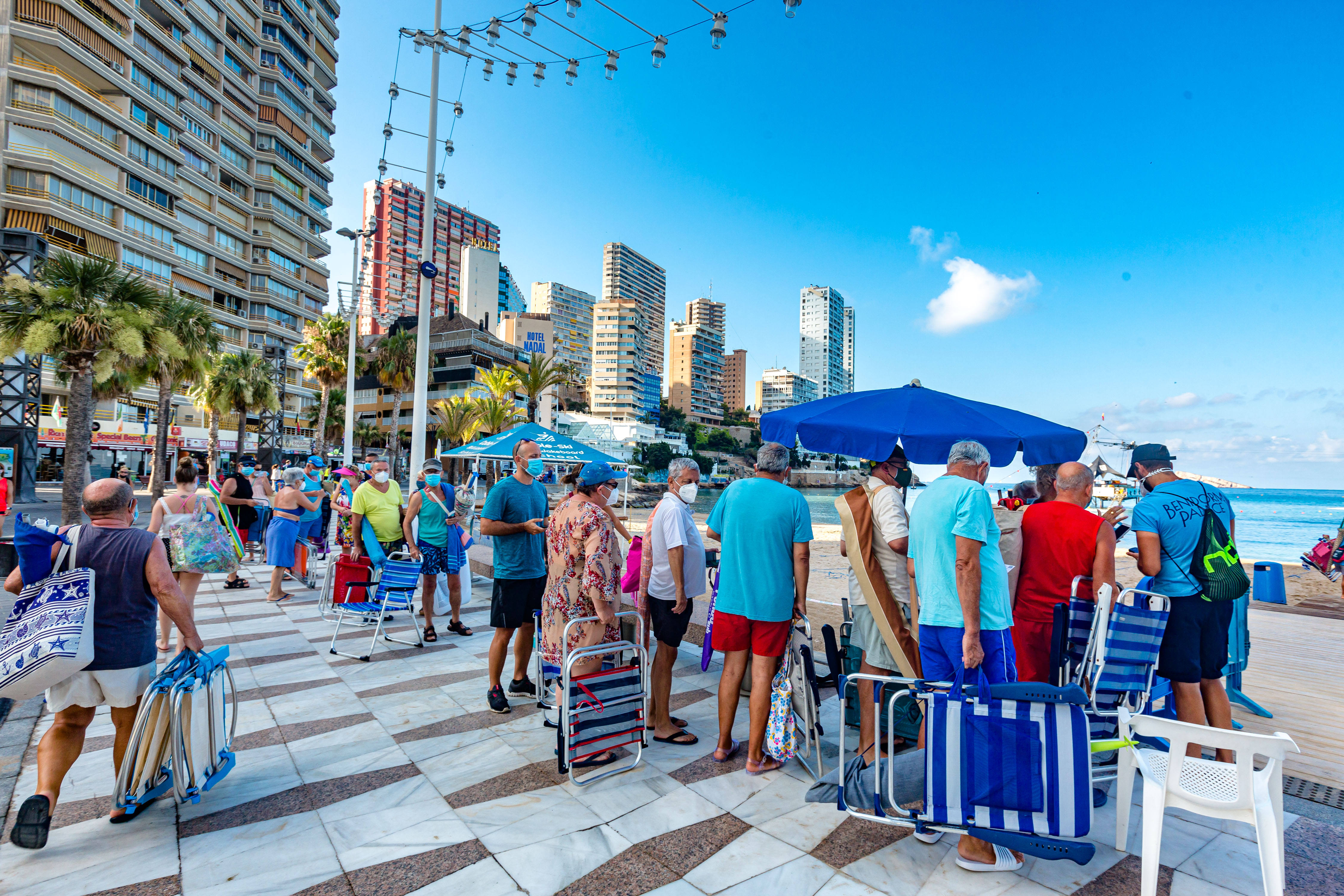 Holiday resorts on the Spanish mainland, as well as the islands in the Canaries and Balearics, were all hit by the same problem as they just couldn’t take all the people who wanted to flock to the beaches to sunbathe and swim.

In Tenerife, the “beach full” signs went up in a number of locations and messages went out to potential visitors to stay away because of the crowds.

In the capital of Santa Cruz, the main beach of Las Teresitas had to turn people in their cars back as social distancing would not have been guaranteed.

The weather in the Canaries has been hitting the high 30s, bringing day trippers out in their droves.

Two other beaches in the north of the island were also closed, at Las Gaviotas and Igueste de San Andrés, with the police posting on Facebook: “ATTENTION: Due to the massive influx of vehicles to the beaches and massif of Anaga.

“The @PoliciaLocalSC will begin to control access to these places. It is recommended to give up if you intend to go to the area.” 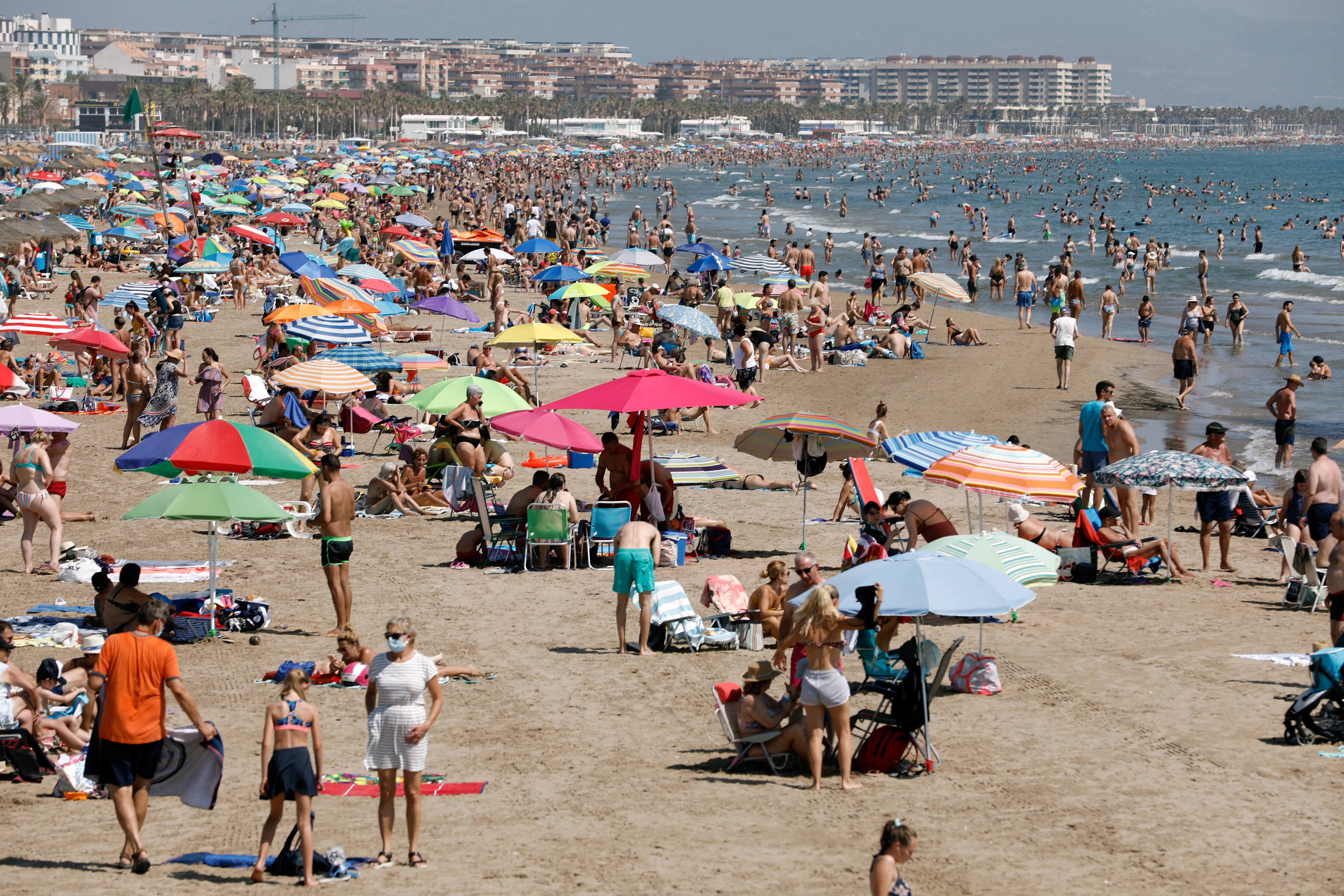 Some beaches are still enforcing masks, while others recommend social distancingCredit: EPA 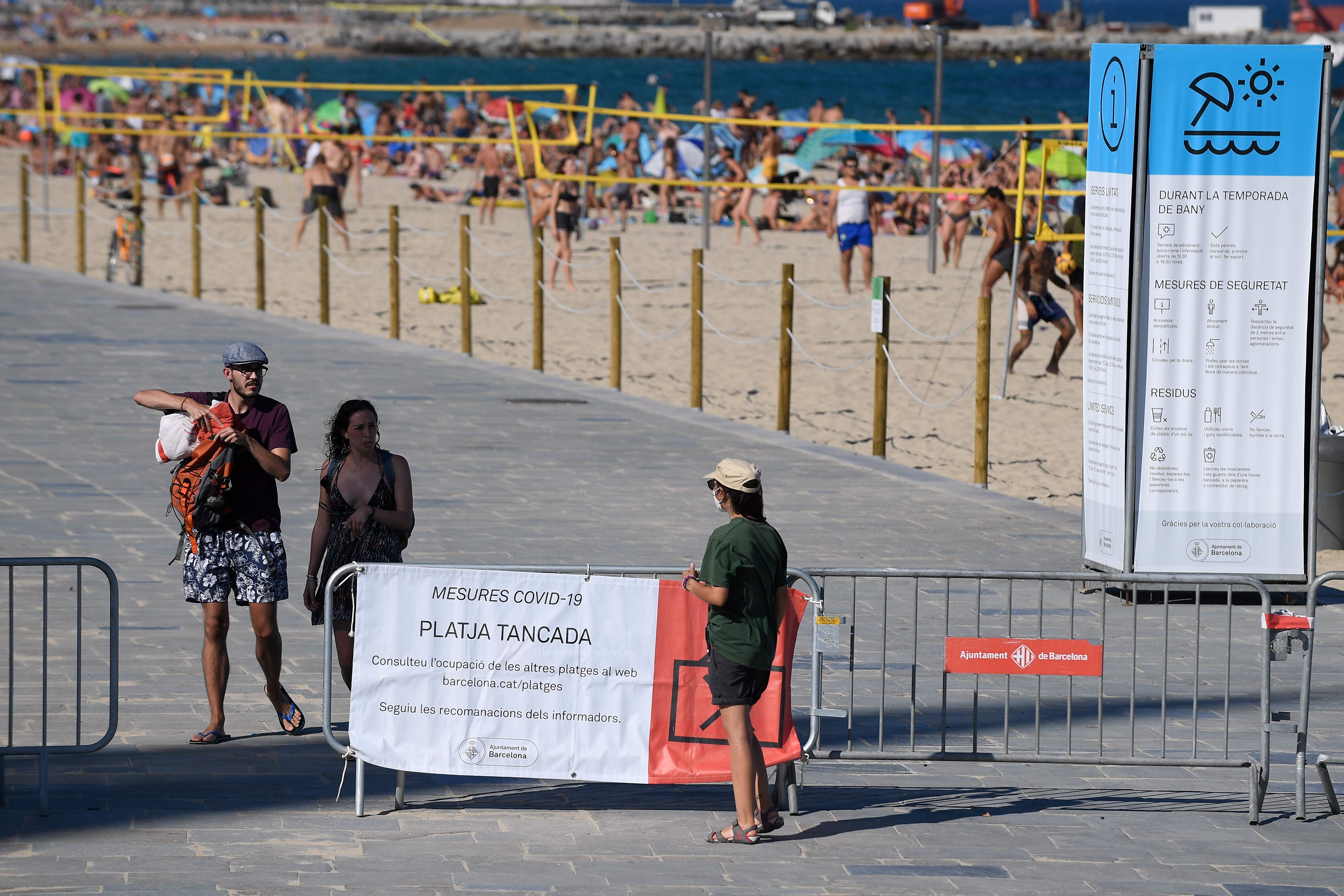 It is the third weekend in a row that beaches have been forced to turn away visitorsCredit: AFP or licensors

Palma city council had to close the accesses to the beach of Cala Mayor after exceeding 90 per cent of the recommended capacity.

A string of other beaches and coves also had to turn people away, with warnings being relayed on the social network “not to come” and “to find somewhere else”.

Police said turning people away was the only way to guarantee their safety and prevent the spread of any coronavirus outbreak.

In Ibiza, police were called in to evacuate a cove in San Antonio after being told there were too many people on it and they were not social distancing.

Around 100 sunbathers were ordered to leave before it was eventually opened with crowd controls.

Beaches on the Costa del Sol were also packed for the third weekend running and many reached capacity. Sunbathers were again turned away so the safety regulations wouldn’t be flouted.

Nerja, Mijad and Benalmadena were the most packed, approaching in some cases well over 90 per cent capacity.

Spanish councils are advising beach-goers to check on apps and websites if their first choice venues have space before they leave or to find an alternative.